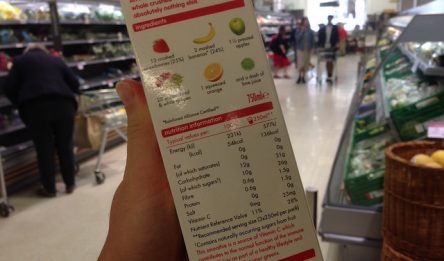 Food and drink packaging varies greatly from brand to brand and has elements of uniqueness to the product it is encasing. For example, some products will use polyolefin shrink film as it is an excellent display film and can help to make products more appealing, and then catch the eye with some brightly-coloured labels.

But more than that, companies are now opting for what is known as chatty packaging, or ‘wackaging’, which features quirky, upbeat slogans to try and attract new customers and create a more personal relationship between the product and buyer. But one Britain’s leading food experts says this form of packaging is past its sell-by date, it is starting to have the opposite effect than intended, and it is putting many shoppers off.

Henry Dimbleby, the founder of the Leon chain of fast-food restaurants and son of broadcaster David Dimbleby, has called this form of packaging patronising and childish. He has even started writing to food companies to complain about the forms of wackaging he finds annoying.

Speaking to The Telegraph, Mr Dimbleby said: “I hate being talked to by bottles and product packaging as if I’m their best friend! It’s unbelievably irritating and infantile and adds nothing to the sum of human knowledge.”

Where did it all start?

The chatty packaging phenomenon is said to have stemmed from Innocent Smoothies back in 1999, who changed the way drinks bottles were designed, offering a more informal approach to providing the customer with information about the product’s benefits and ingredients.

More marketing agencies picked up on this technique as a way of trying to appeal to younger consumers, either through the naming of their products or other straplines on the packaging. For example, one bottled drink from Pret A Manger has “Best when chilled (as indeed we all are)” on its packaging, while Tyrrells include suggestions with their crisps such as “perfect with a pork pie hat at a rakish angle”.

This form of marketing has clearly worked for Innocent, who started out as a group of Cambridge students selling drinks at festivals, and it would seem that they are more than happy to take credit for the trend.

“Since Innocent began, lots of brands have emerged who have a more human and informal tone of voice on their packaging. We think this can only be a good thing,” one of their copywriters, Lucie Bright, has said.

But Mr Dimbleby believes the whole thing has got out of hand, saying:

“As with all these things there was someone who first did it well, and there was a point to it,” he said. “But then it became a style which lots of copywriters and marketing interns began to copy, jumping on the idea without much thought.

“There’s something really irritating about it, so every so often I take photos of it and write to a few firms to complain.

“I suspect they think I’m a bit of an old Scrooge who is no fun at all. But I’d rather food companies just played it straight with their customers.”

He recommends that manufacturers and retailers stop trying so hard to appear clever, and they should instead focus on the old advertising rule of: “Don’t tell me how funny you are, make me laugh”.

Do you agree with Mr Dimbleby’s thoughts? Let us know on our social media channels.